“Deaf U” series paves the way for Netflix 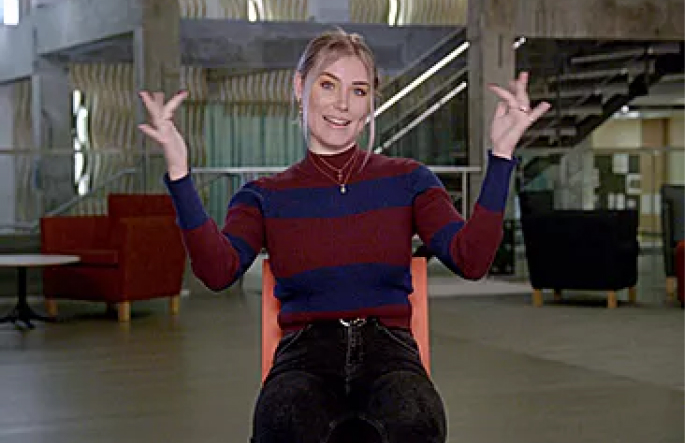 The goal of our series was to break the stereotype of the deaf in the hearing world, says the film’s producer Niall Di Marco.

A new documentary series tells the story of deaf and hard-of-hearing college students at Gallaudet University who are having a discussion about their relationships and their identity in the World around them.

When Niall Di Marco, an actor, model and activist for the rights of people with disabilities, attended Gallaudet University (a liberal arts college for the deaf and hard of hearing in Washington, DC), he often thought: everything that happens before his eyes would probably be a great TV series on television.

Original dialogues, very funny stories about each other, contradictory ideas of their own identity, a very close-knit community of deaf young people — “I always felt that we really needed a reality show about the university — so many juicy things happen on campus,” Di Marco told the Guardian through an American Sign Language (ASL) translator.

“Deaf U” is a Netflix reality show created by Di Marco, which tells about several deaf and hard-of-hearing Gallaudet students who change the boundaries of relationships, sex and dating, social networks, and their relationship with the deaf community during one semester of college. More than eight episodes, each lasting about 20 minutes. “Deaf U” is a typical Netflix reality show: a narrative about instant feelings, love triangles, a confrontation scene at a party, “letting off steam” during club nights and socializing over food, family segments in which emotionally complex backstories are revealed. Often covered up for banal student flirting. The series also shows, without sensation or condescension, changes for the deaf community in the hearing world, both big — for some-this is the way to study ASL in college — and small: for example, to make an extraordinary order to the bartender in a nightclub, so that the music transmits the pulse of the bass in low tones.

Di Marco himself is one of the few deaf talents appearing in major television reality shows. And he is the first deaf winner of the famous American contest “America’s New Top Model”, and a little later, the winner of the show “Dancing with the Stars”. “In most cases, when we see deaf characters in TV shows or movies, they are very one-dimensional. There are no real nuances in who they are. You don’t delve too deeply into their personal experience. And the viewer, unfortunately, does not always see the original features in their character .”

“Deaf U” is a show about completely deaf or hard of hearing people, made mainly by members of the deaf community (30% of the film crew, 60% of the directors and producers). The show offers “a way to look through the lens at their friendship, their romantic relationships, their travels and what their growing up in college looks like, how they are looking for their identity,” says Di Marco. They study their own experience of a deaf person in a community with hearing people, without preaching it, and without using it in the tone of social advertising.”

“The deaf community is quite small,” says Di Marco further. Our show accepted open applications for participation in the casting, but deliberately chose such a cast in order to highlight a number of particularly interesting cases of the deaf and people with partial hearing loss. Gallaudet University is officially bilingual, with training in both English and ASL. Not all, but about 1000 of all students grew up only on ASL, which is like a family tradition (because only 10% of deaf people are born from deaf parents).

On campus, generally accepted cultural stigmas around sexual orientation and accessibility are intertwined with judgments about language proficiency, the origin of the deaf, and people’s hearing abilities in general.

Carefree images of the social scene of life in Gallaudet — group dinners flying through the gossip on ASL. The evolution of language (in one of the segments, Deaf U students explain the meanings of a” floating gesture”, such as a wig, which is used to indicate the name of Donald Trump). Often there is a misconception of those who hear that we do not have our own culture. And we must explain ourselves that our community itself has a very bright and unique culture.

But people often think that this is impossible, ” says Di Marco.

“It’s a constant battle. We definitely need to see more popular shows like “Deaf U”, which include our entire culture.” His previous projects, including a half-hour comedy about the life of the deaf in America, being developed on Spectrum, also clearly demonstrate that the culture of the deaf really exists.

As an” innovator “— the first reality show entirely dedicated to deaf characters- “Deaf U” takes on a double task: to reflect through the University of the Deaf, and partly through the hearing audience, its communication experience, as well as to introduce a wide range of viewers on Netflix to the culture of the deaf.

“I am very excited about this event, because what we have always been waiting for as a community for so long — to be in the spotlight and really rethink our experience in the general public — has finally happened,” said Di Marco.

“Never before in history have we really, in the broadest sense of the word, we have not gone beyond what it means to be deaf or how it looks from the outside. I always say that there is no one right way to live deaf, whether you are fluent in the language, or your family background, family school, or if you did not have the opportunity to study at an institute for the deaf and all that stuff, ” he says.

“I am very glad that we are showing our film to the audience right now, at a time when there are serious obstacles on the way to full accessibility of the environment. From the lack of open subtitles in cinemas and to dangerous shortcomings in public health during the pandemic. Many government resources do not make their public health information available to deaf or blind people. The problem has become even more acute during the viral isolation period, since the Trump administration does not include ASL sign language interpreters during its daily coronavirus briefings, and the use of masks has made lip-reading impossible.

Lawyers insist on the creation of clear instructions in the law on communication in hospitals for deaf patients (for example, the presence of a pen and paper for working with translators) and amendments to virtual technologies, such as Zoom or Google Hangouts, which will allow the use of hidden subtitles.

“Accessibility to all public and social resources is the key.

It is important that every person in any situation has the opportunity to understand what is happening in the World.

​”We are talking about 30 million people in the United States alone and 466 million [worldwide] who are deaf or suffer from some form of hearing loss. It is really important that we change our attitude to our world, ” Di Marco said. The series “Deaf U” is just the tip of the iceberg — fun and informative, and well-known to a wide audience by the playback format.

“This is the first in the history of such a large film project about deaf people,” said Di Marco.

“This is a truly revolutionary series for all the deaf.”